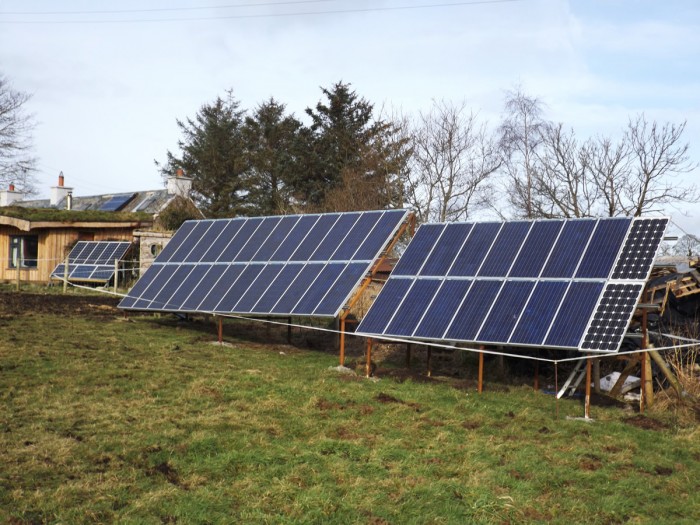 We’ve come to realise that ‘off-grid’ is more than just the act of not using mains electricity or water – it’s an attitude, and there are as many variations out there as there are people. For us it’s about independence and resilience. The most visible aspect  is solar pv. What started as a couple of 80W panels has grown into a collection of some 48, totalling 4kW, mounted on roofs and ground frames, and controlled by an increasingly complex set of equipment. You’ll notice that a grid supply still comes to the farm – our original plan was to have the very intrusive 11kv pole moved, and sell surplus into the grid, but the prohibitive cost of getting it moved means that we will be having it removed in 2015. Until then we are using the time wisely to get our setup right as we bring all our PV on line, and upgrade components such as our batteries to enable us to be entirely independent of the mains supply. Our current 270Ah battery bank is only just capable of managing the washing machine, but we’re upgrading the batteries shortly to give us about 800ah capacity.

We were fortunate to be given 3kw of these 80w panels, which are 9 years old, but still performing as they should. This is maybe a sign that a market for second hand panels will evolve as people replace smaller ones with fewer large panels. We’re hugely grateful to St.George’s Church in Belfast for them. 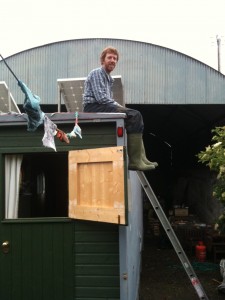 When we first thought of living off grid, it was primarily through necessity – a combination of wanting less bills to come in, and of living at that time, in a converted horsebox. Mains electricity, water and waste weren’t an option, and so a couple of solar panels and a little wind turbine provided power, we collected rainwater from the barn roof, and used the composting loo on the farm. It was a basic system that met our needs, and was also great to learn with, without costing a fortune or risking too much.

We’re learning about and building systems that will hopefully see us through many years to come – and then hopefully we won’t have to worry about what is being added to our water supply by a company we can’t hold accountable, and we won’t have to fret over the rising cost of electricity as old power stations are retired, and a combination of poor policy and changing climate take their toll. 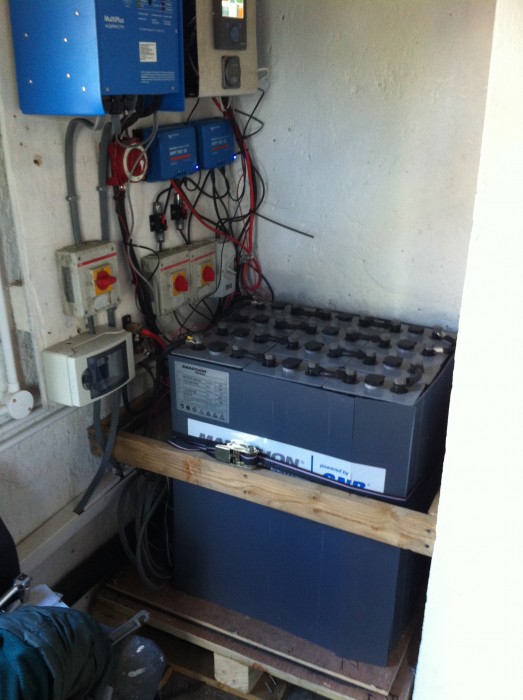 For those that have an interest in such things, we run panels in series strings of 100 – 120 volts, to 3 Victron MPPT charge controllers that look after the batteries, which are 1000ah of traction batteries at 24 volts.  From the batteries, a Victron Multiplus 3000/70 inverter/charger converts 24v DC to 240V AC and feeds the buildings through regular circuits, which are split into lighting and power. The Victron can also switch in a generator if the batteries are getting low – it is a clever bit of kit indeed. We have Philip Gordon at Leisure Batteries Ireland to thank for his help and advice. The system is monitored by a battery monitor, and a Colour Control GX that communicates with all the system components, and the outside world via the internet.

We also have our trusty 400w wind turbine that currently provides power to the truck, but which will come to be connected to the house once we find cable big enough. 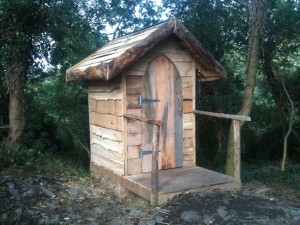 As much as anything, being off grid is about taking responsibility – for your power, heating, lighting, water, and waste. The latter involved building composting loos, of which I am very fond, if one can be fond of a loo.

Someone said to Nick Rosen that you only ever swap one grid for another, which is possibly true, but we never wanted to opt out completely, and so electricity, water and waste are off grid, but our internet use patently isn’t. We don’t travel everywhere by goat, but we do use the car less.

More recently we have had to adapt to having a baby daughter, and so have parked the truck next to one of the many little cottages that are fast vanishing from the Northern Irish landscape, and are applying what we’ve learned to make it a slightly more permanent off grid home. It too is made from natural materials, is as low impact as possible, and relies heavily on freecycling, recycling and reusing. Not a lot bigger than the truck in many respects, which remains as part of our home. All very exciting.. 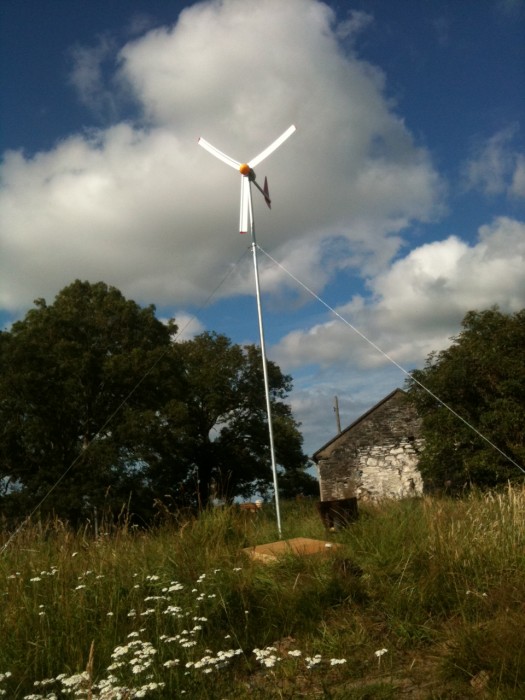