Building and installing a ram pump 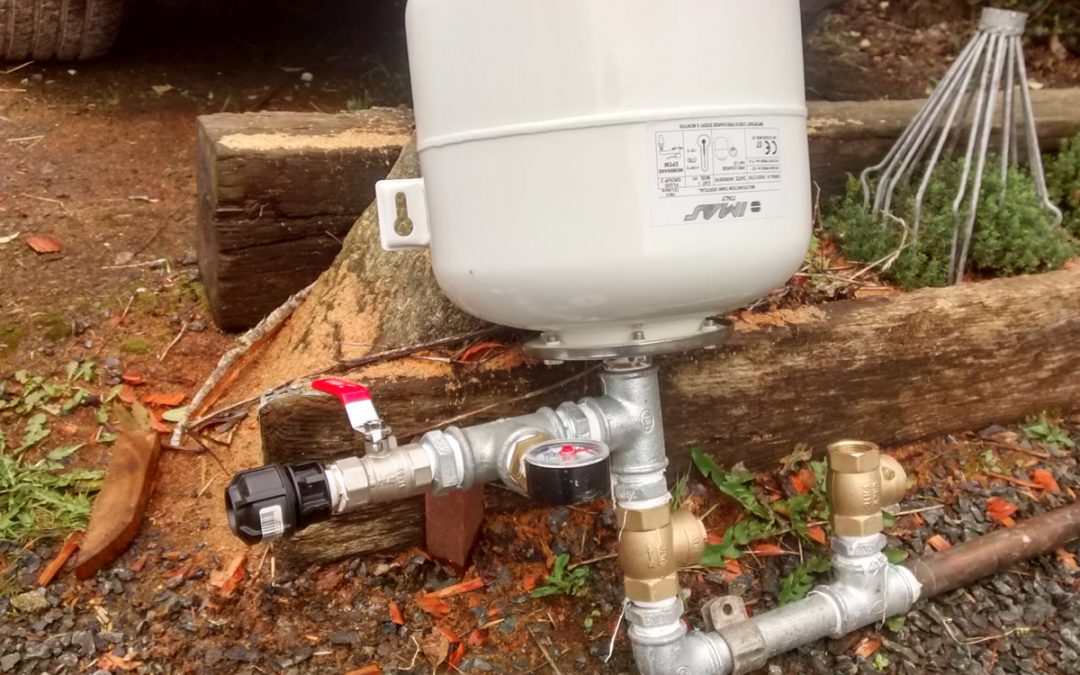 A little stream runs through the farm – actually its a drainage channel, cut into the rock to drain this part of the bog, well over a hundred years ago. The fields and woods drain into it, and it heads off through the countryside which is mostly level. As it passes through our land, it falls by a couple of feet, and you can hear it burbling away behind the polytunnels. The water is coloured a brown colour by the peat (and possibly by the iron in the rocks). It has always looked like a useful source of water but until now, I assumed there wasn’t enough to make it useful, and anyway, how would we get it from the bottom of the stream to the polytunnels above.

This is where the ram pump comes in. For the uninitiated, a ram pump is an entirely mechanical pump, that uses the energy in flowing water of a stream to lift a small amount of that water. For every 1 foot of fall (or head, as its known) in a stream, it can lift water up about 8 foot or more. 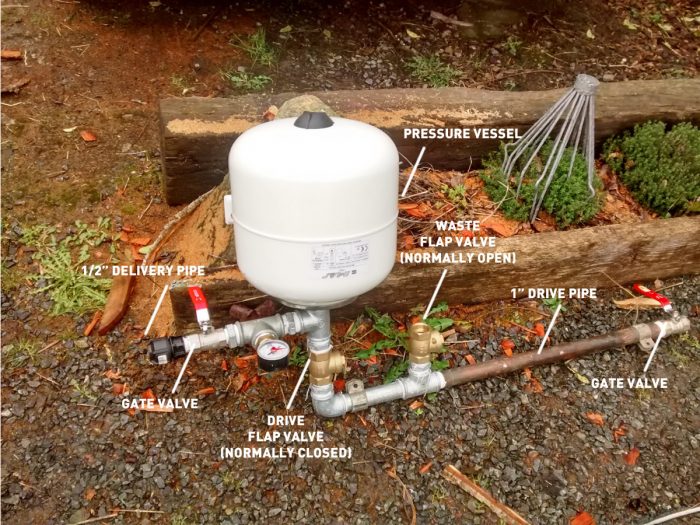 Water enters the pump through a drive pipe, which is typically a rigid pipe, between 20 and 100 foot long. It passes into the pump and out through a normally open one way valve. The friction of the water causes the valve to shut. The water has nowhere to go – it can’t go back up the pipe, so it passes through a second normally closed one way valve, and off up the delivery pipe to wherever it is being pumped. This takes the pressure off the first valve, which falls open again. The water begins to flow out of it again and the cycle begins once more. During each cycle, about 90% of the water flows out of the first (waste) valve, and about 10% goes through the second (drive) valve. A pressure vessel is typically added so that the water flowing out of the pump builds up some pressure to smooth out delivery.

There are a few rules of thumb to bear in mind:

You need at least a foot (ideally four or more) head of water. It seems to just about work with a foot.

The length of the drive pipe needs to be at least 150 x the diameter of the pipe, and no more than 1000 x the diameter of the pipe. The pipe needs to be as rigid as possible, because it is the shock wave of the closing and opening valves that drives the pump, and any flexibility in the pipe will absorb some of that, reducing the effectiveness of the pump.

The drive pipe should be about twice the size of the delivery pipe.

The waste valve seems to work better as a flap valve, and I’ve used flap valves in both, but some people use a spring valve for the drive valve. Some use spring valves for both. The flap valves are cheap though.

Here I am testing the pump. It needs to be fed from a body of water (ie a bucket) – NOT from a hosepipe, as the pressure from the hosepipe will overcome the shock wave in the drive pipe and prevent it from working properly. To start the pump, you shut the valve on the delivery side, hold the waste valve open to let air out, and then release it. It might take a couple of pokes at the waste valve to get the pump to start, but once its going, it will continue as long as there’s water in the reservoir supplying it.

Here it is set up in the stream, working away quite happily. It took me pre-filling the drive pipe with water from a hose to get the air out, before it would get going properly.The pipe needs to have an even(ish) downhill slope to prevent air getting trapped in it. I put some plastering mesh over the inlet to prevent debris going down the pipe and clogging the pump, and the end of the drive pipe is held in place with a large rock, as the water comes out of a culvert. 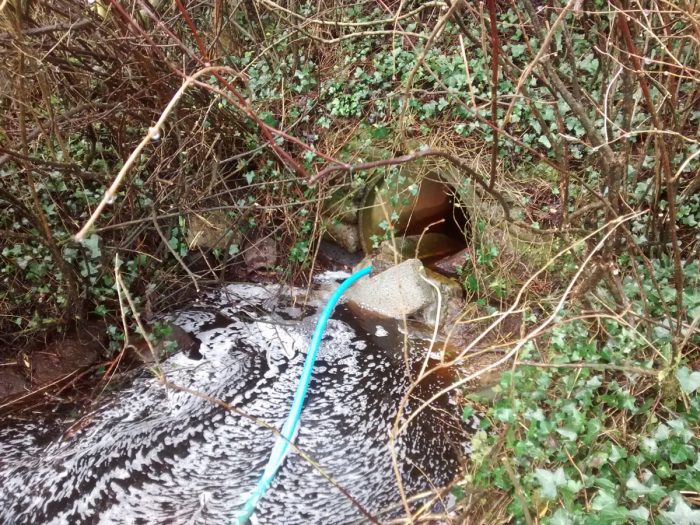 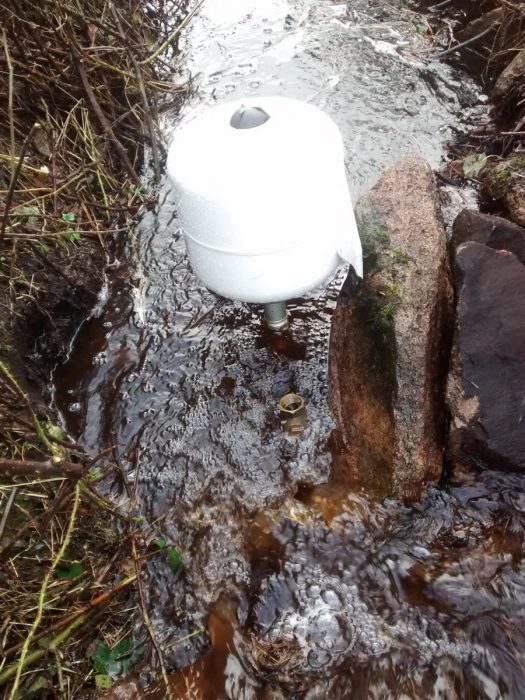 The pump is set at the lowest point I have, in order to maximise the head of water. It remains to be seen whether the waste valve stays above water in heavy rain conditions but we’ll soon find out. 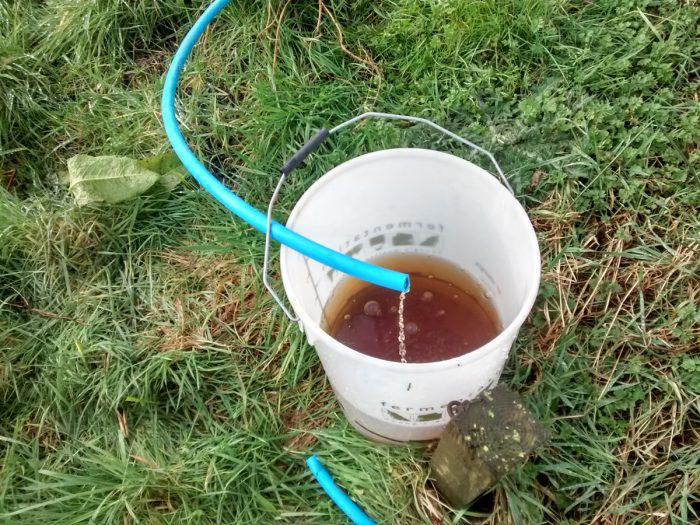 and here’s what comes out of the delivery pipe. It will definitely need tested and then filtered before we begin dosing the polytunnel with it. Initially I got about 25 litres an hour out of the pump but after having it run for 24 hours, and making adjustments to the drive pipe, I’ve got that up to around 60 litres per hour. Mainly by making sure that the open end of the drive pipe is well under water (at least 3 inches), and by ensuring the pipe had no high spots on its way down.

I’ll probably make a better job of the inlet, damming the culvert to raise the water level slightly. I also have to raise a 1000litre IBC up to about 1 metre high so that we can then run the stored water through a basic filter, into a drip irrigation system.