The trials of a new range cooker 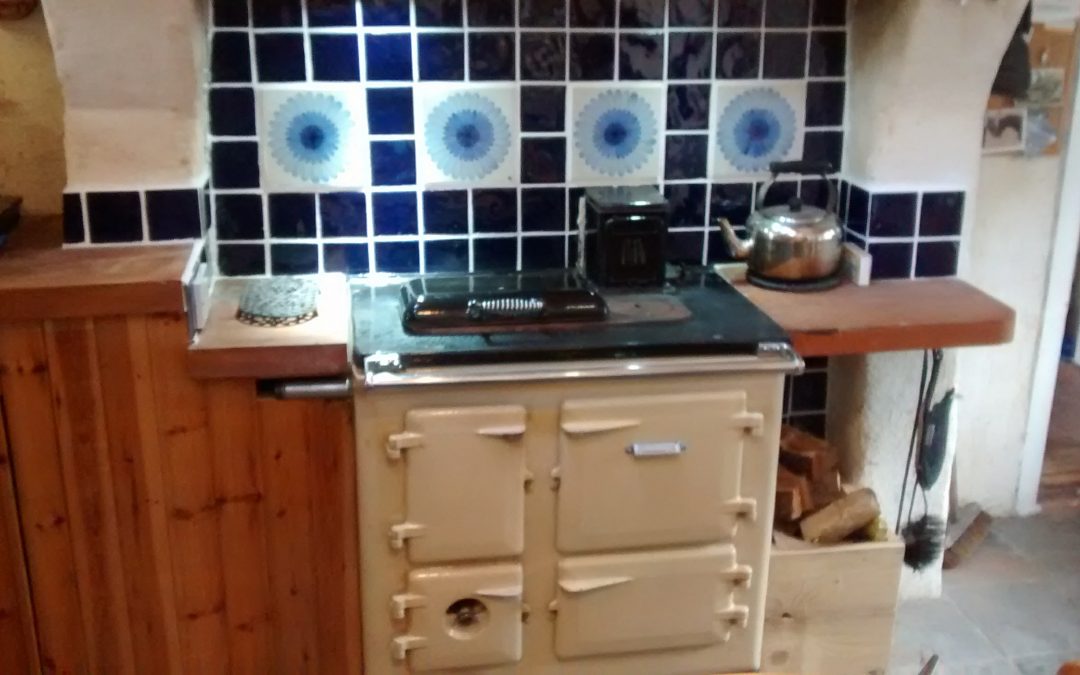 I have a terrible habit of browsing Gumtree for interesting sounding things, and specifically for old, cheap range cookers in the hope of finding one that will keep our old Doric on the road. A couple of weeks ago I was rummaging around and turned up not a Doric, but a Wellstood Two – the bigger brother of the Doric, from the same 1950’s era, but with the addition of not only a warming oven, but a hotplate cover. In the world of little old ranges, these are positively the bells and whistles of any self respecting range cooker. And it was cheap, a shade over a hundred pounds. Next thing I know we’re arriving home with the venerable Wellstood in a trailer. 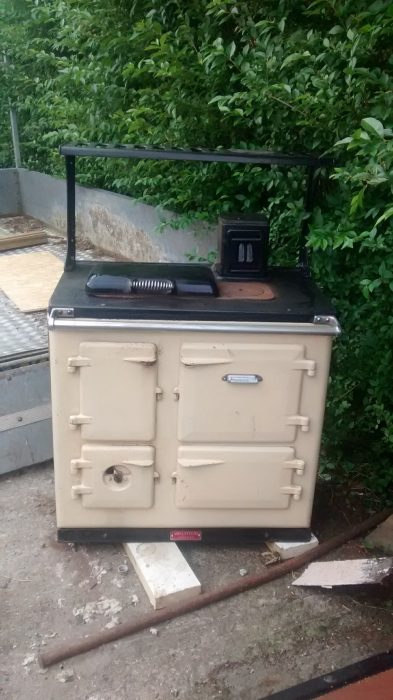 Bloody hell it is heavy. Three hundred and fifty kilos of cast iron, and Claire and I managed to lever it on to the everlasting B&Q trolley (25 years old and counting) and inch it into the kitchen. I felt terribly guilty taking Doric out, having spent five years getting to know her ways, and her enamel has paid a terrible price for some incredibly hot fires and an ever decreasing quantity of protective fire brick. 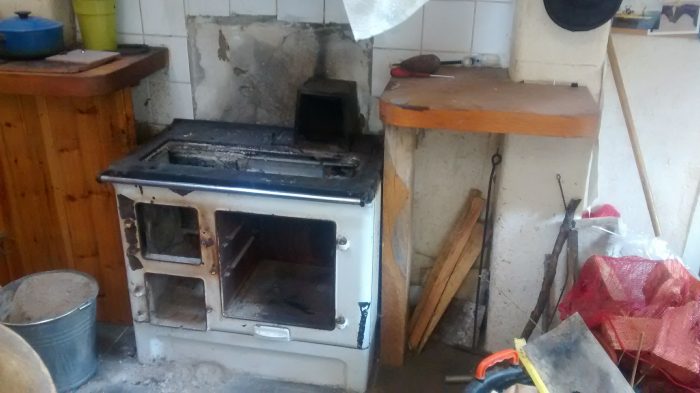 Doric is a small cooker, not helped by the fact that the floor was laid around her, and so she had shrunk by nearly four inches over successive modernisations, and was a complete bugger to get out, leaving a hole in the floor. In the end all sorts of bits of kitchen were removed, as the impact of my casual purchase spread out. (I should add that Doric has been subsequently cleaned and stored pending a full rebuild, and we have Future Plans for her). 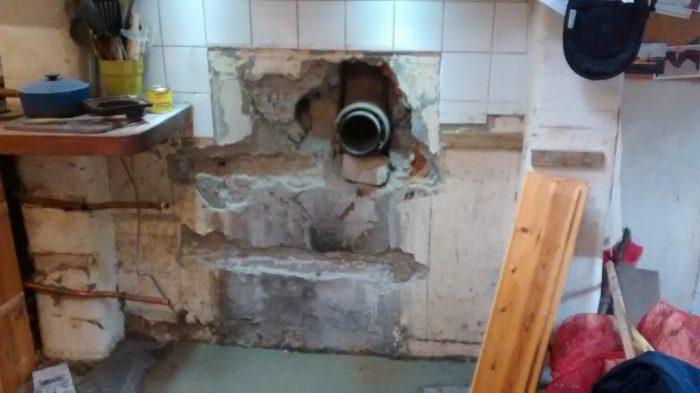 Of course the flue was now the wrong height, and so a hole was excavated into the wall, and the thing moved around, and then patched back in, and the floor repaired. At which point we wheeled in the Wellstood and pretty much considered the job to be done. Pats on the back all round. 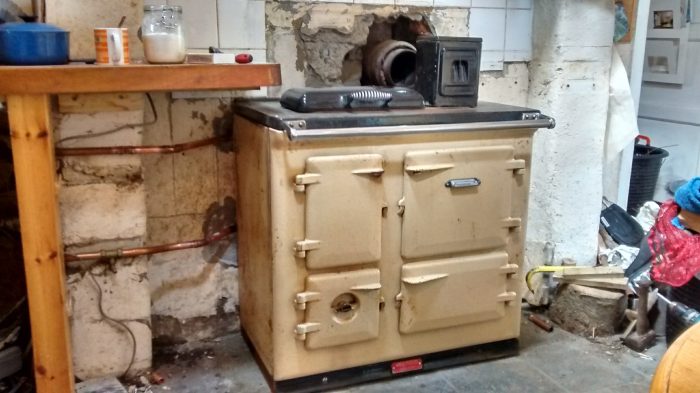 A bit of pipe wrangling and some fire cement for the flue, and there we were. Triumphant and ready to light. The whole process had taken less than a day.

Except for the point where I went to light the fire and realised that the firebox was full of water. The boiler had a leak. After a cup of strong tea and a bit of sobbing, the range was disconnected again, and shuffled into the middle of the room to begin the process of removing the boiler. It had been living quite happily where it was since 1950-something and so was reluctant to leave, but a morning with a grinder and a drill, and the deed was done, and all the old screws tapped out and ready for new ones to go back in. Our friend John (a real heating engineer) offered to test and weld the old cast iron boiler for us, and off I went only to discover that the boiler had much in common with a colander, and repairs were impossible.

More tea, and a bit more sobbing. Then a call to H&F in Tipperary, who restore stoves and make boilers. Yes they could make one but it would be a day or two. The day or two gave me the chance to discover that the difference between our 1950’s Wellstood (who make Esse ranges) and a modern Esse, is basically a better burn, and better insulation. So out came all the old dusty fibreglass, and in went new ceramic blanket (the same as is used on kilns), and some perlite. 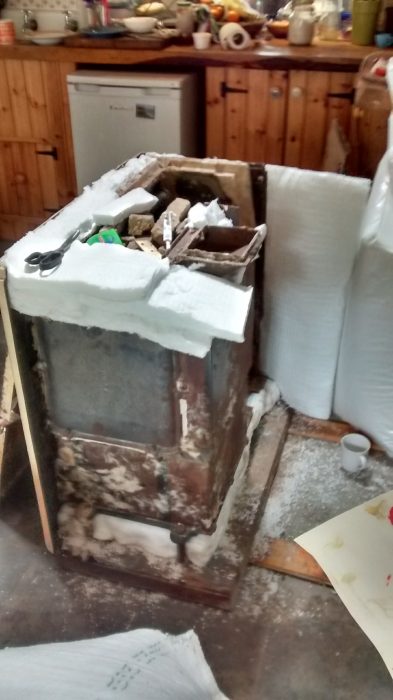 Then I wondered how I might improve the way that the wood actually burned in the range, and decided to drill some holes, and add a pipe to inject air into the top of the fire. Wood burns best when air is fed from above, unlike coal which needs air to come through the base of the fire. Most ‘multi fuel’ ranges use the latter method, but its not great for wood. So the range gained an addition – 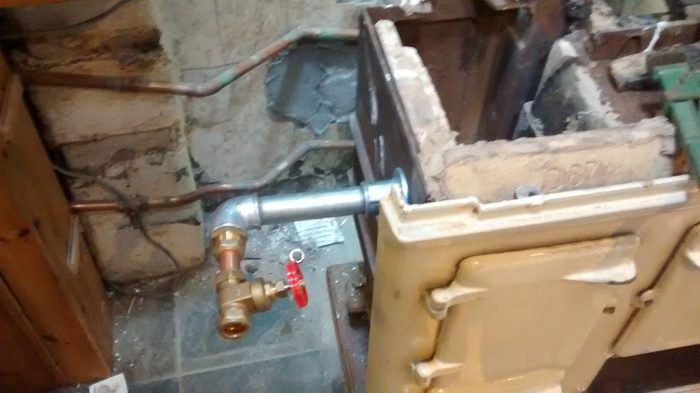 Some one inch pipe and a gate valve to control airflow on the outside, and a drilled pipe on the inside to deliver the air – 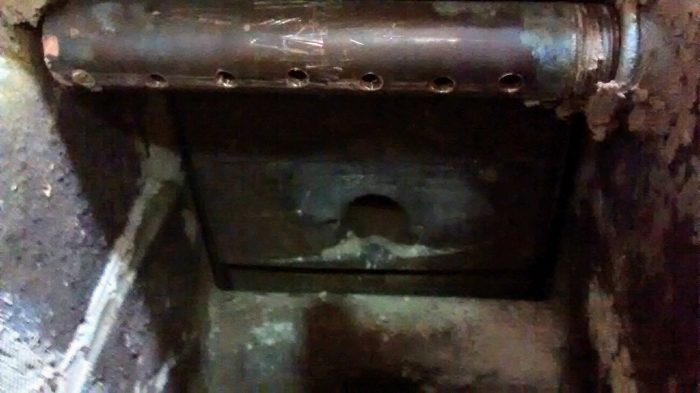 And then the boiler turned up, so I was able to put it all together again. Here it is – hopefully the last time we’ll see it for a while now. 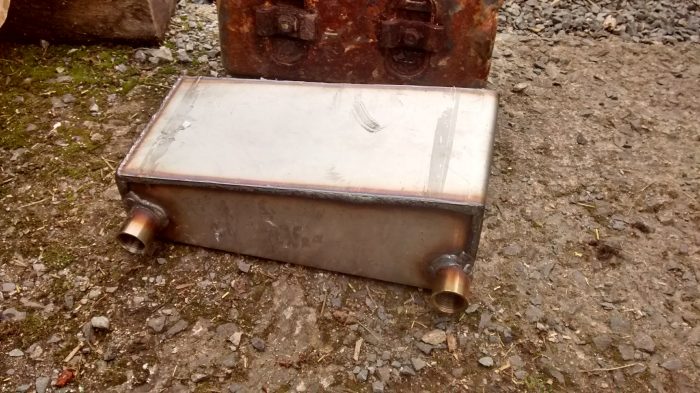 Then I spent another day connecting it up, and filling it with water (forgetting to adjust the ball valve in the attic tank and accidentally making it rain in the hall for a while), and happily it works. 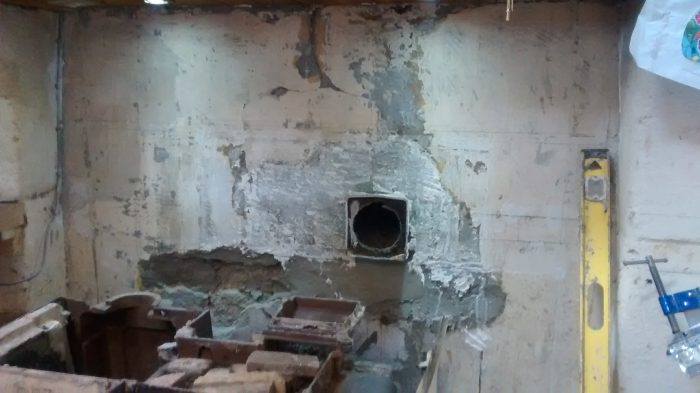 Of course then we decided that we might as well get rid of all the old white tiles behind it and do the job properly, so more mess was made, and another day of frantic tiling and clearing up, and the result is rather fine. And our water is hot again. 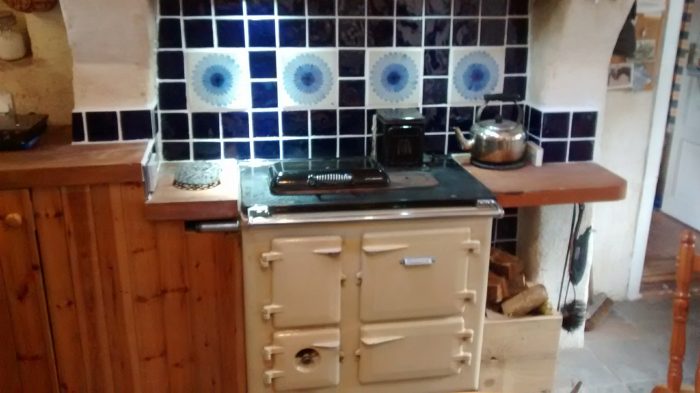 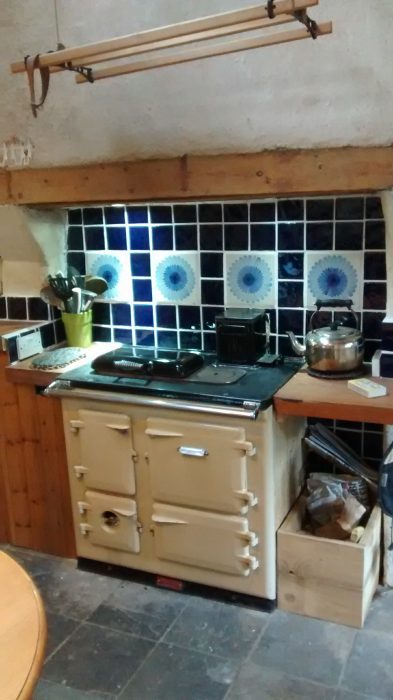 Postscript – The week after we were given another range which turns out to be identical, albeit in not such good condition. It is in the process of being stripped and renovated….More to follow